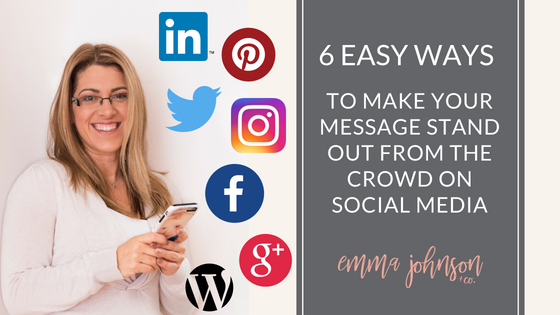 If you’re advertising on Facebook, you will already be well aware that there are MILLIONS of advertisers out there.

And guess what…all those advertisers are also competing for your prospects’ limited attention.

Yep—unfortunately, you are not the only one showing up in their News Feed.

Far from it. Sponsored posts are almost every 6th post as you scroll through your feed, right?

Which begs the question, given all the noise and endless distractions out there…

How do you make your message so compelling that people can’t ignore you?

How do you make yourself different?

And most importantly, how do you stand out from the crowd and actually connect with people?

To help answer this question — whether you’re putting together ads, writing an email, or posting on Facebook — I’m going to share with you my top six ways to make your message so irresistible…

… that people will immediately stop scrolling their News Feed or inbox…and pay attention to what you have to say.

And once you connect, it’s going to be that much easier to sell your products or enroll new team members into your business.

First, make sure that what you are posting is relevant.

When your prospect sees your ad, your post, or your email, they have to know it’s for them.

They have to know that you’re talking to them…personally.

Say something that’s going to resonate with them, provide a solution to their problem or concern, empathise, be relatable.

When you post something, make sure that it’s relevant to your audience.

Next, you should always make your message personal.

Talk about yourself. (You’ll also want to talk about them, but we’ll cover that a little later.)

Share a bit of your story. Perhaps you have been rejected, felt frustrated, or felt like a failure because I had zero results, nobody bought from you, nobody joined your team.

I know I have felt those things at one point!

You want people you’re trying to attract into your tribe to get to know you. That is what’s going to help them like and trust you.

Nobody buys from someone they don’t like and trust

If you’re only posting about your business or products, they won’t ever get to know you.

Why would they connect with somebody they don’t know?

Reveal a little bit about your life.

Being relevant and getting personal with your message is super important.

A story is the glue that holds your message together.

Talking about concepts and benefits, or principles and philosophies is good, but it can be dry and people will scroll on by.

But, when you can convey that same information in the form of a story – whether it’s about yourself, something you read, something you saw on television, in the news, or in a movie – it creates a mesmerizing effect on people.

People are hardwired to pay attention to stories. They are engaging and entertaining.

The minute you start telling a story, you disarm people, their resistance drops and they start paying attention.

Let me give you an example…

When you watch a film, you know it’s not a true story

Even if it’s based on a true story, you know it’s just a film and that it’s not real life.

But for two hours, you’re fully engaged, because it’s a story. (Unless it’s a really rubbish film, of course!)

Now I’m not telling you to share two-hour stories.

But by using brief stories in your ads, Facebook posts, or emails, you’re going to create that same emotional effect on your audience.

The decision to buy is emotional – but people back up that buying decision with logic.

So when you’re posting a message or telling a story…

Charge your words with emotion.

After every message I write—whether it’s an email, an ad, a sales letter, or even a blog post—I always look it over and ask…

The answer to those questions relies on hitting on specific pain or frustration points or talking about the goals and desires that you know your audience would resonate with.

We buy things for emotional reasons

Think about the last time you bought something—new clothes, a car, a house in a certain area, a vacation.

Well, you probably bought it because it made you feel good, then you justified it with logic.

So if you’re trying to persuade people to see the value of your product, make it emotional.

“What is it about my product or business opportunity that’s going to appeal to people on an emotional level?”

Once you have the emotional hook, then bring in the facts and logic to help them justify the decision to buy or do business with you.

When we see something that provokes our curiosity, we automatically want answers.

…it immediately triggers a question in your head, even though I’m not directly asking you a question.

When I say I’m going to tell you how to do something, assuming it’s relevant to you, you immediately want to know…

That’s a very basic, but very powerful way to communicate.

Start with a “how-to” statement

You can always tweak it later, but start with “how to.”

For example, if I say…

“How to recruit more, but prospect less,”

Anybody who’s interested in growing their business, and is sick and tired of prospecting and rejection, is going to be extremely curious.

They’re going to want to know…

“Yeah, how do you recruit more people and prospect less?”

If you’re dealing in the diet industry, you might say…

“How to lose weight by eating fatty foods.”

This is super curiosity provoking, because we’ve all been taught that you should avoid fatty foods.

Injecting things that provoke your audience’s curiosity will make your message a lot more compelling.

Always answer the question … “What’s in it for me?”

You can tell your story, use emotion, make it personal, provoke their curiosity, and all that good stuff…

But at the end of the day, when people read your message they want to know…

Always think about how what you are offering benefits your prospect.

How is it going to help them?

For example, let’s say you have a highlighter at your desk.

All it does is highlight stuff, right?

But, you didn’t buy it to highlight stuff.

You bought it because you want to make your life easier by emphasizing certain things you’re reading.

A highlighter is a shortcut.

You use it to highlight important points in a book.

That way, you can go back later find those important points without having to search the whole book.

A highlighter makes life easier for you.

That’s what’s in it for you.

Look at items around your house and ask: what the benefits are of that particular thing?

What’s in it for you?

Look at all the books on your shelves. Why did you buy them?

Did you buy them because you wanted to read them?

No, you bought them because you wanted the information.

You wanted whatever the promise of that information was.

It was the end result that the book promised you.

That’s the bottom line to your ads and to your messages.

The six ways to make your message irresistible are…

Focus on these six things every time you sit down to write a message, and your ads, your emails, your blog posts, your videos are going to be a lot more compelling and a lot more interesting.

They’re going to be irresistible and pretty much impossible to ignore.

Now, if you’d like to learn more about connecting with your prospects using the Internet (with less stress and a lot quicker than using traditional methods), then I strongly encourage you to sign up for my FREE 10 day attraction marketing training videos.

In these 10 daily emails, you will learn how to build your business online using proven “attraction marketing” strategies so that you can put an end to chasing time wasting leads.

Plus, you’ll see first-hand how my mentor Ferny Ceballos, CMO of Elite Marketing Pro, passively generates 300–500 leads per day, 30–50 customers per day, and recruits 70–100 new serious business-builders into his business each month.

And if you found this content helpful, I would love to read your comments below!

If you want to PERMANENTLY END REJECTION… and discover a simple system for attracting qualified prospects to you … PLUS get paid whether they join your business or NOT… then this comprehensive eBook sets out step by step what you can do to start (or turn around) your business quickly and easily without bugging friends and family.

The Anatomy of the Perfect Blog Post (FREE) – Learn More

If you are new to blog writing and would like some direction, then this FREE download is a great place to start. You can discover how to quickly and almost effortlessly create a money making blog and how this can be used to build your business.

Did you get some value from these social media marketing ideas?

I hope you did because each week I put my heart into making sure you get some amazing social media marketing ideas and strategies to rock it in your business while creating a life you love.

Wanna Share This Because You Love Sharing Valuable Info?

Stand Out and Stay Connected… drop a comment below.

You are a Star!

Question of the week: What personal development books are you reading at the moment?

If you are, let us know which ones you found most helpful.

Hope you enjoyed these posting tips.

Join the Conversation You Started